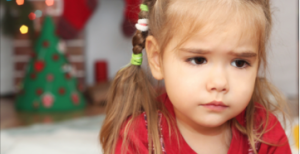 The stockings are resting against the fireplace hearth, filled to the brim with toys and treats.

I patiently watch as my four-year-old baby girl rips open the shiny red paper concealing the latest toy all kids are asking Santa for this year. A $350 “Hatchimal” I purchased after waiting in line at Toys R Us for over two hours.

Her face lights up as the glowing robotic egg slowly breaks apart. Finally, the furry, bird-like toy makes its appearance.

I can’t help but wonder: will she remember this moment in the years to come?

My daughter is home today but will be returning to her retail job bright and early to be ready for the Boxing Day madness.

I see the stress weighing heavily upon her 24-year-old shoulders. Though she graduated two years ago, she still owes more than $47,000 in student loans. While she studied a program she hoped would land her a good paying job and lead to a fulfilling career, she’s been trapped in this retail position since graduation. Now, according to the government bureaucrats in Ottawa, she is considered the “educated poor.”

As our family gathers round the tree, opening gifts and sharing memories of Christmases past, I look at my daughter knowing all too well the financial pressure she’s facing.

And I can’t help but wonder… is this her Christmas future?

How different would her Christmas be today, in 2036, if from the day she was born, I started planning for her financial future?

I remember the day I visited the bank and proudly opened an RESP, as suggested by my bank advisor. I remember all the times I had to make sacrifices to make those contributions. But I was proud to have deposited my $36,000 by the time she was 17. Each year, I received the $500 from the government as my little reward for the $2,500 I deposited to RESP.

I was shocked when my daughter brought home her first tuition payment requirement of almost $28,000. I totally trusted my bank advisor when he advised me to open the RESP and never thought why over the 17 years I saved for her education and university costs kept going up, why I only got the same $500 every year. It never occurred to me to ask my bank advisor why the grants from the government to match my deposit weren’t increasing at least with inflation or the cost of education.

I was doing what they told me to do.

Unfortunately, by the time my child began university, the government had not increased that education grant at all since 2008 when they increased the annual maximum matching grant from $400 to $500, despite the fact that my daughter’s four-year university education was going to cost her a total of $103,440.

We managed to give her the money we had saved in the government RESP plan, which covered her first two years. The rest she had to borrow from the very same bank and from the government who she now has to repay.

Today, as I watch her constantly checking her watch, unsure of what her future will bring, I can’t help but think of my Christmas past with her, when she was just four-years-old, opening that Hatchimal gift from Toys R Us.

I need to ask some hard questions and think outside the bank box. If RESPs are for children’s education, then why are students today according to The Canadian University Survey Consortium study of 2014 graduating with $ 31,376 in student debt? ($18,031 student loans and $13,345 in bank debt)

Why is it taking them over 10 years to eliminate that student debt?

If RESPs are for education, why according to a Globe and Mail report is the total amount of student loan debt in Canada $21.3 billion in 2012? Imagine what it is today…

As her parents we have to not simply accept the hype and marketing of the government that the RESP’s are the only option for her future and think for her future beyond just her education..

As I look at my four year old daughter’s smiling face this Christmas, I know she doesn’t have the luxury of waiting to begin planning for her financial future starting at 25. She’s counting on us to start today, when she’s four, or else that Christmas dinner in 2036 won’t be a happy time – not for her, or for me.

Michael Lampel is President of insuranceforchildren and creator of Child Plan™, Canada’s fastest growing alternative to RESP. From the day you open a Child Plan™, your child or grandchild will receive an annual tax free dividend for life, which they can use towards any university or education program around the world, down payment on their first home or for any financial need in life.

Child Plan™ is Canada’s fastest growing alternative to RESP. It’s a secure and flexible way to invest in your child’s future.

To learn more how Child Plan will provide your child with the funds for their future education and financial security for life, book a virtual meeting with a Child Plan Advisor.